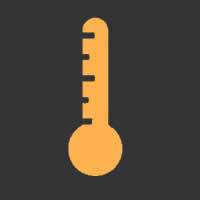 The degree Celsius is denoted as °C and is always written with the ° symbol next to the 'C' and a space after the number so that 20 degrees Celsius is written 20 °C.

For just over 200 years after its introduction in 1742 the Celsius temperature scale was known as the Centigrade temperature scale due to the 100 degree difference between the freezing point and boiling point of water. However this caused confusion in Spanish and French where a unit of angular measurement was also known as centigrade and in 1948 the CIPM adopted the term degree Celsius to eliminate this confusion.

The Kelvin temperature scale is named after the Northern Irish physicist William Thompson (The 1st Baron Kelvin) The scale is based around an absolute zero ("infinite cold") and uses the degree Celsius as its unit increment. Absolute zero is defined as being the point at which the atoms of a substance transmit no thermal energy (i.e. they are completely at rest).

The kelvin is one of seven base units of the SI system of measurements and is denoted by the symbol K and 20 kelvin is written as 20 K.

The Rankine temperature scale was named after the Scottish physicist William John Macquorn Rankine and, as per the Kelvin scale, it is based around an absolute zero and uses the degree Fahrenheit as its unit increment. The Rankine scale has fallen out of favour and is rarely used these days.

The degree Rankine is denoted by the symbol °R, so that 20 degrees Rankine is written as 20 °R. Some texts refer to Rankine without degree and use the abbreviation R in the same way that Kelvin and K are used.