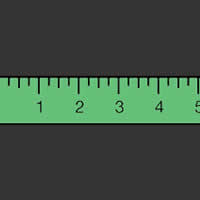 The word metre is spelt in two different ways. Users of American English use the spelling 'meter', whereas others use 'metre' from the original French spelling.

The picometre was also called the micromicron (Abbreviation: μμ) prior to standardisation on the term picometre.

The nanometre was also called the millimicron (Abbreviation: mμ) prior to standardisation on the term nanometre.

The micrometre is often referred to as a micron with abbreviation μ.

The myriametre is an obsolete metric length unit equavalent to 10,000 metres.

Also known as the thousandth (as it is one thousandth of an inch) or sometimes in the USA as the mil. Plurals are thousandths and mils respectively.

The double quote symbol " is used to indicate inches. e.g. 3" for three inches.

The single quote symbol ' is used to indicate feet. e.g 5' for five feet.

The rod is a unit of length also known as the pole or perch (neither of which appear to have abbreviations either).

Commonly used for lengths of horse races, this unit is often abbreviated as just f.

This section covers Nautical miles, fathoms and other units that are used at sea.